As many of you know I have a little boy at my house who is also 4 years old. Like you he is at hope waiting for things to go back to normal so he can see his friends and go back to school. We thought we would show you things we have been doing to keep busy.

Lots of our ideas come from stories we have read (you can find online versions or videos for each story) Most of our stories have been read in a den which we have made under a table. Perhaps you could try some of these activities to... Kitchen Disco is a fun story about what fruit gets up to when there is no one around. After reading this we made banana ice cream. Chop, freeze, blend - and I promise it tastes like ice cream!

Making some simple toilet roll middle binoculars has turned our walks into Gruffalo and bear hunts. We have also been on phonics walks looking for things that begin with a chosen letter. 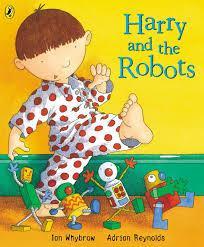 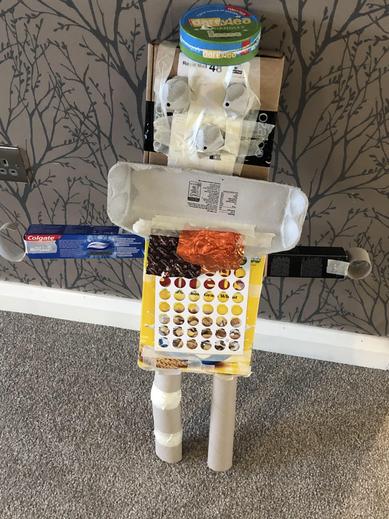 In Harry and the Robots Harry makes a robot to replace his broken toy. We decided to keep all our recycling until we had all the pieces we needed to make our own robot. 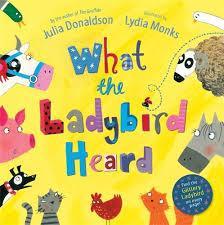 When we were playing with the toy farm we set it out to match the route the men in the van planned to take to steal the prize cow. We were then able to act out the story with our small animals. Just like in the story we then jumbled the animals up to confuse the thieves.

We didn't have a Gingerbread Man cutter so we thought about the different shapes we could make. Some of our biscuits were 2d shapes, we also made a boy and a girl and a space scene. Our challenge was to name the shape before you were allowed to eat it. Making paper dolls was something we had never done before. We had fun choosing what each of our characters was going to look like and what name we were going to give them.

Wow Said The Owl is a story about an owl who wakes up in the daytime and explores all the colours she has never seen before. We began talking about owls and other birds that we knew the names of. We realised we don't see many birds in our garden and decided to made some colourful bird houses to encourage more birds to visit. These are now hanging from the tree in our garden. Another favourite story of ours is The Very Hungry Caterpillar. We folded pieces of paper in half and remembered to paint on just one half. We printed the paint onto the other half of the paper to make a symmetrical pattern. When the paint was dry we cut the paper into butterfly shapes and added a finger print caterpillar to. As we can't have a party or have our friends to tea we have had to get our teddies to join in. We played party games and made sure we shared out the plates and cups fairly. Our favourite part of All Afloat On Noah's Boat is the colourful surprise at the end.

Our rainbow was made of paper towels, what do you think happened when the ends went into the water?

We used paper towels and food coloured water to explore mixing colours. Do you know which colours we made? To keep in contact with our family and friends we have made and posted some cards. This dinosaur was made with a hand print. We also painted the sky and the volcano lava.

Sensory trails - chalk paths with instructions to follow. Arrows to guide direction of feet after a jump, star jumps, one foot hops, curved path to follow, hands down, lines to jump over and the finish line to end.

We created a bear from paint and a paper plate. We used a fork to make the fur like texture with the paint. The bear reminded us of the story Brown Bear, Brown Bear. Which other animals could you make from this story?